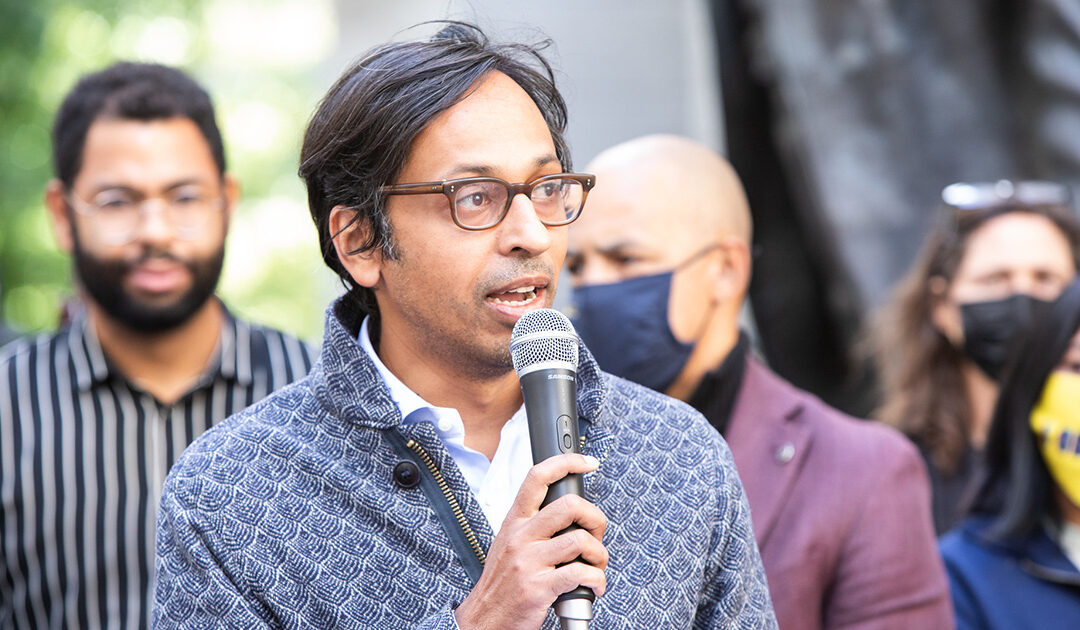 Harrisburg, PA − November 3, 2021 − Building from the work of generations of organizers and activists fighting housing discrimination around the country, State Senator Nikil Saval (D–Philadelphia) today announced the introduction of his Fair Chance Housing legislation (Senate Bill 912), which adds protective measures to safeguard housing as a human right for the one in three Pennsylvanians impacted by a criminal record.

Formerly incarcerated people experience houselessness at a rate nearly 10 times that of the general population. Fair Chance Housing works to enshrine a person’s right to housing by amending the Pennsylvania Human Relations Act, prohibiting discrimination based on an arrest or conviction record.

“Our criminal legal system has a core narrative that purports to be rooted in transformation, redemption, and second chances. But the reality is that formerly incarcerated people face pervasive, unrelenting discrimination with every step that they take,” said Senator Saval. “Fair Chance Housing is an important tool in reforming our state’s criminal legal system, in pushing back against mass incarceration, and in the broader fight for equity and justice.”

“Criminal records create barriers to employment, education, and housing,” said Rep. Bullock. “If we truly believe in rehabilitation and second chances, then we must responsibly remove these barriers so that people with criminal histories can secure gainful employment and a safe place to live. This Fair Chance Housing legislation is similar to ‘Ban the Box’ policies that made employment more accessible. It can do the same for housing.”

Every year, some 650,000 Americans complete their sentences and return from prison to begin the impossible process of navigating the nearly 50,000 federal, state, and municipal laws that restrict their access to basic, vital resources.

The statewide movement for Fair Chance Housing is happening in tandem with efforts in Pennsylvania’s second-largest city. Pittsburgh City Councilperson Erika Strassburger has begun work on Fair Chance legislation at the municipal level.

“We need this legislation to help correct the wrongs of systemic oppression,” said Councilperson Strassburger. “I applaud Senator Saval’s leadership on the state level, and I look forward to introducing similar legislation here in Pittsburgh.”

Entrenched legal discrimination and social discrimination have led nearly 75% of formerly incarcerated people to struggle with unemployment a year after release, driving rates of re-arrest and re-incarceration. However, when a person’s right to safe, affordable, stable housing is protected, neighborhoods are stabilized, funding for long-term community investment is freed up, and safety is promoted throughout communities.

“We thank our State partners for restoring our belief in second chances,” said Philadelphia City Councilmember Curtis Jones, who spearheaded the successful Ban the Box efforts in Philadelphia to expand the city’s fair hiring law. “To allow people who have served their debt to society to resume full citizenship is what this bill provides.”

“We understand that housing is a fundamental key to the reduction of crime and most definitely in the reduction of recidivism,” said B. Preston Lyles, a Philadelphia resident who has faced challenges securing housing because of a criminal record. “Without decent, safe, affordable housing, returning citizens remain under threat of having to break the law in order to survive, so it’s time to stop the gross discrimination and realize that returning citizens must be welcomed into our community to keep our community safe and secure.”

The Fair Chance Housing legislation introduced by Senator Saval is modeled on existing laws in San Francisco, CA; Richmond, CA; and Seattle, WA. Momentum in adopting these protections is increasing around the country, with Illinois, Louisiana, and New Jersey each introducing different levels of protection this year.

A petition to sign on in support of Pennsylvania’s Fair Chance Housing legislation is available here.

The full text of Senate Bill 912 is available here.