State Legislators, Advocates, Family Members Urge Governor Wolf to Use Reprieve to Save the Lives of Incarcerated People 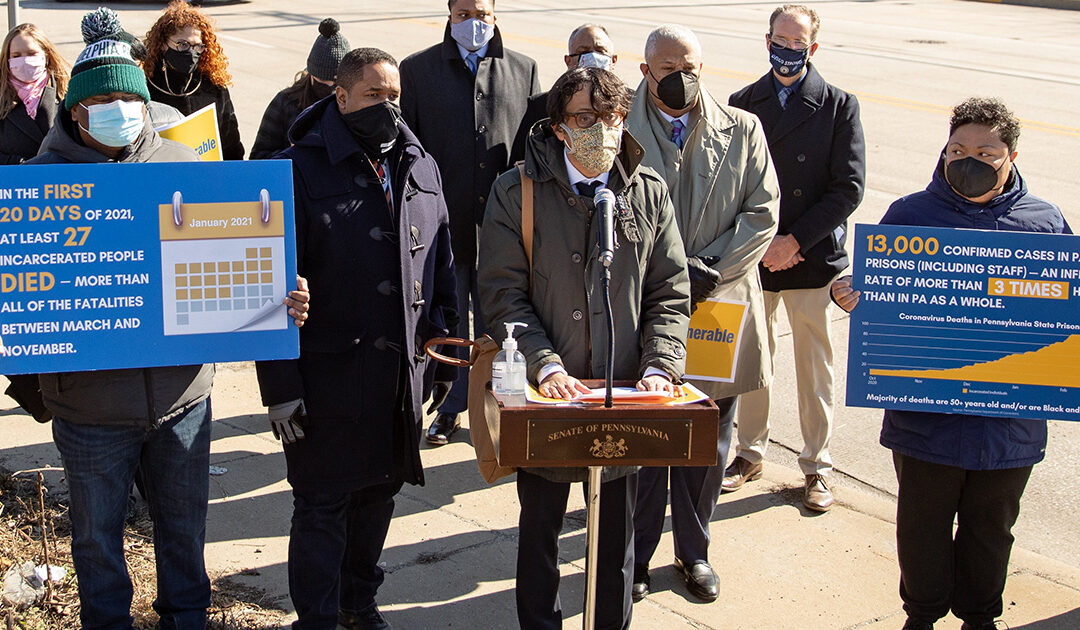 CHESTER, PA − March 2, 2021 − In a demonstration of unified support for reprieve, nearly a dozen state legislators gathered outside of State Correctional Institution–Chester (SCI-Chester) to urge Governor Tom Wolf to use his executive power to release incarcerated people who are elderly and medically vulnerable. The legislators were joined by advocates and organizers from national and local organizations, impacted family members whose loved ones are currently incarcerated, and formerly incarcerated people who spoke of their experiences and of the need for swift action.

“In the midst of a deadly pandemic that has claimed more than 500,000 lives in our country, elected officials have a moral obligation to protect all of our constituents,” said Senator Nikil Saval (D–Philadelphia). “Each death is a tragedy and an outrage. And while legislation languishes, more people will die. Reprieve is the only tool that can be used to immediately release people from prisons. We gathered today because we needed to show how many voices are united in this demand: reprieve must be used to release those who are most vulnerable.”

“Prisons are super-spreader environments and pose significant risk to the community,” said Senator Sharif Street (D–Philadelphia). “Moreover, incarcerated individuals in the care of the Commonwealth maintain the fundamental right to be free from death and disease. I join my colleagues, advocates and families in calling on Governor Wolf to take as much unilateral action under the constitution as possible to save the lives of vulnerable Pennsylvanians in our correctional facilities, especially older, medically vulnerable inmates who we know statistically do not present a public risk.”

The event comes at a time when the death rate from COVID-19 among people who are incarcerated in Pennsylvania prisons is three times that of the general population.

“Unfortunately, COVID-19’s rampage through Pennsylvania has not stopped at the prison walls, in fact incarceration has proven to be an increased risk factor for catching this deadly disease,” said Senator Anthony H. Williams (D–Philadelphia/Delaware). “I join my fellow legislators in urging the Governor to use his reprieve power more broadly while we work to pass legislation allowing for medically vulnerable citizens who have already served lengthy sentence to return home to their communities.”

SCI-Chester is located in the 9th Senatorial District, which is represented by Senator John Kane (D–Delaware/Chester).

“A prison sentence should not mean a death sentence,” said Senator Kane. “The Governor has the power to stop needless harm on some of the most vulnerable in our communities. I urge him to use his power of reprieve to keep those incarcerated safe.”

At the onset of the pandemic in 2020, in recognition of the urgent need to reduce the prison population, Governor Wolf created the Temporary Program to Reprieve Sentences of Incarceration, through which more than 1,200 people were identified as being eligible for reprieve. So far, the program has fallen far short of its purported goals: fewer than 200 people have been granted reprieve, and none since June 2020.

For months, advocates and organizers have called on Governor Wolf to recommit to this program in order to protect people who are incarcerated, staff members of prisons, and surrounding communities.

“Every day that this administration fails to take sufficient action, people are dying. Every day, family members have to stay up, stressed, scared, uncertain of whether their loved ones will be safe,” said Representative Rick Krajewski (D–Philadelphia). “If you think that reprieve is not the right option, come up with a better option. But don’t just wag your finger and say that we’ve done everything that we can and throw it to the wind.”

“In order to mitigate the harm of the pandemic, the prison population must be reduced so that the people who remain incarcerated can single cell and social distance. Governor Wolf must expand his reprieve program to save lives,” said Kris Henderson, Executive Director of Amistad Law Project.

“Every day that passes with no action taken to expand reprieve efforts adds an increase in risk for incarcerated elderly and medically vulnerable individuals,” said Senator Katie Muth (D–Montgomery/Chester/Berks). “Urgent action is needed now, and we cannot wait another minute for the unnecessary and unjust harm to take another life.”

”Asking the Governor to use his power of reprieve to allow elderly, medically vulnerable offenders temporary release to control the pandemic is sound public health policy,” said Senator Amanda M. Cappelletti (D–Montgomery/Delaware). “As an elected official, I have a duty to protect all Pennsylvanians, no matter where they reside.”

In early February, nearly three dozen State Senators and State Representatives issued a bicameral letter to Governor Wolf acknowledging his efforts, affirming their commitment to working with him on legislation, and urging him to use reprieve during this moment of emergency.

Senator Maria Collett (D–Bucks/Montgomery) was one of the signatories of the letter. Senator Collett was not able to attend the event at SCI Chester but emphasized the potential for sickness and death in the face of inaction.

“As a registered nurse and the Democratic Chair of the Senate Aging & Youth Committee, my concern about the wellbeing of our Commonwealth’s vulnerable seniors does not end at the doors of our jails and prisons,” said Senator Collett. “Incarcerated seniors face an increased risk of death if they contract COVID-19. Whenever possible, reprieve must be offered to mitigate the spread and save lives.”

“We already know that our criminal justice system is fundamentally broken, and the lack of a more expansive reprieve—during the spread of a deadly pandemic—for certain vulnerable prisoners who pose no real threat to society is another example of its flaws,” said Representative Malcolm Kenyatta (D–Philadelphia). “I ask that Governor Wolf do the morally right thing, and consider a more merciful fate for the incarcerated who are elderly, sickly, or are non-violent offenders.”

Family members of incarcerated people were also in attendance, offering stories of their loved ones and their experiences during the pandemic.

“Why hasn’t there been more action taken to release inmates to reduce the prison population in accordance with CDC guidelines?” asked Angela Baker, whose significant other is incarcerated at SCI Chester. “Our loved ones remain in lockdown in prisons across the state and Governor Wolf has refused to expand his reprieve program. Unless he acts to release more people the death toll will continue to rise in Pennsylvania prisons.”

The full recording of this event can be found at www.pasenatorsaval.com/state-legislators-advocates-family-members-urge-governor-wolf-to-use-reprieve/.